After saying yesterday that we were not going to go to the cricket as it was predicted to be 39c, we ended up there. The only reason it happened was because Leone, Frasers sister in law, rang us from work to say a work colleague had two free tickets to one of the air conditioned corporate stands and wasn’t going to attend the first day. Well, what can you say.

It is about now that all of our non-Australian friends are going to switch off. We understand. You have to be brought up on cricket and even if you are, you either love it or hate it. We do get it when people say, how can you sit out in the sun for five days, watching a slow game and still end up with no result. True statement – obviously cricket is an addiction. Maybe we can compare cricket to curling when it comes to the uniqueness of the two games.

Frasers nephew Alastair dropped us off at the cricket ground to save public transport on such a hot day. It feels weird to be driven around by a nephew who we last saw when he was 15 and is now 6 foot tall and just finished high school. He is awaiting his results to see if he gets into Economics at Sydney University. His older brother Lachlan has just finished his third year officer training in the Naval Academy in Canberra. In a couple of months, their parents are going to be empty nesters so they will now be embarking on the next phase of their lives.

Arriving at the cricket, India were in batting and had lost three wickets in 19 balls – that folks is a stupendous start for Australia. Another wicket fell within the next hour at 4/41.

Our seats are beyond perfectly satisfactory. They are probably worth about $100+ each so we were soooo lucky.

We noticed there were all these people on the roof of the stadium dressed in blue and thinking they were security, but it turns out that they are tour groups. Seems a little weird as you get the same effect by paying $30 and sitting in the nose bleed seats. Can understand doing it over the top of the Sydney Harbour Bridge as you see the most spectacular views in the world. It must have been stinking hot up there. 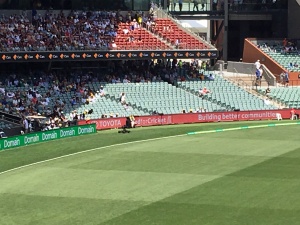 Maybe we just haven’t done a lot of sporting events in the last 15 years but the TV technology is amazing. There was a little 4WD buggy the size of a pram whizzing around the field with a camera on it along with a flying camera on wire above the game. The stadium has very recently had serious renovations so maybe this is the latest technology. We hope to go to the MCG (holy ground of Australian cricket) so we will check that out. The G as they call it has a capacity of 100,000. It is always such an unreal atmosphere in the place even if you don’t like the cricket.

The most coveted cricket day of the year is to attend the G on Boxing Day. The stadium is absolutely chokers and maybe we might get to go. After this five day test, they do the next one in Perth and then the G starting on Boxing Day. Di’s sister Paula and Dex who are joining us in Melbourne for 11 days over Christmas dislike cricket with a passion. It would be great if we could drag them to a 20/20 game which consists of 20 overs only per side and lasts about three hours in the evening. Maybe we can convert them👍👍. Are sure this last statement is making them reconsider their trip to Melbourne – oops. 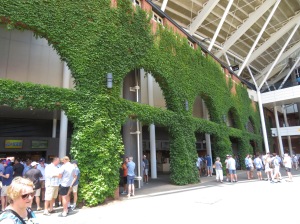 We went for a stroll around the ground for a break and a very pleasant lady allowed us to go into the members stand for a squizz. It was nice but heaps of them were sitting out the back of the stadium under shade watching it on TV – sorry, don’t get that.

Sir Donald Bradman is to cricket what Babe Ruth is to baseball. His career batting average was 99.94 and was an Australian who lived in Adelaide. Factoid: The ABC’s post office box address is based on The Dons batting average of 99.94 where ever town or city has an ABC office has a PO Box of 999.

The stand in the picture above is named after the Don. It is indeed a privilege to be able to stand in this stand! The most hallowed cricket ground in the world is Lord’s of London which we visited back in 1991. We were also allowed in the Long Room which is a male bastion but hopefully that is changing with women’s cricket. Australian women’s cricket is currently doing a lot better on the world stage than the men’s which will hopefully raise their profile.

On our way out of the stadium we came across this great statue of The Don in action.

So enough cricket for now and if you are one of the non-Aussies following, well, you are a trooper or someone who might need to get a life!!

After the game finished at 6.00pm we walked over the road from the stadium to the River Torrens and along the bank to the University Rowing Club where Fraser’s brother David was doing some rowing practice.

After having a look around the rowing shed we headed off home for a much needed shower after sitting in 38c temperatures for most of the day.