Oh dear, another slow start to the day for us but that was because we were all up until midnight playing a board game. We headed out for a dim sum breakfast which was a very filling start to the day.

Back to Marsh Manor to pack up the bags, put Coco in the car and head west from Halifax to the other side of Nova Scotia. 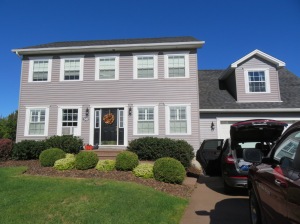 The guys took us to a place called Noggins farm where the first activity was to get ourselves horribly lost in a corn maze with one of us being allergic to corn – hmmm, not well thought out. We had been given a map to follow but even then we were directionally challenged. It took us an hour to get out!

How is this for getting a baby and a dog to pose perfectly at the same time with their mum and dad?! 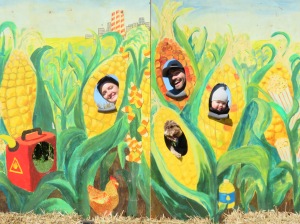 Next it was Emmett’s turn to see if he could make Allan throw up.

Off to pick out the pumpkins for Halloween…..

Complete with a baby pumpkin.

Emmett was such a good boy today as we dragged the little fella around with a minimum nap and took poor Coco way out of her comfort zone also.

It was then a tractor ride out to the apple orchard which had a huge variety of apples that we could pick. Many of the different apple varieties we had never heard of but we got to taste them. 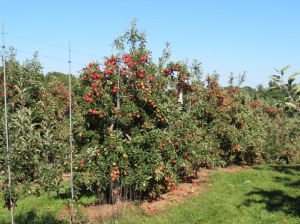 We made our way into Wolfville for dinner before our wonderful hosts Allan, Paige, Emmett and Coco had to return to Halifax. We have booked into a lovely old Victorian Inn that the guys recommended to us complete with a four poster bed. We will get a photo of the place tomorrow morning and put it on the blog site.

Having an early night as we have a busy day tomorrow and relearning how to look after ourselves after five days of being spoilt rotten.