We  can report that today was a non-event. Here we were with the boat securely battened down against potential attack, baton at the ready, cell phone fully charged and both of us on heightened alert and all to no avail. That’s not to say we didn’t see or experience anything.
The canals were certainly full of a lot more rubbish and often having to reverse the engine to spit the rubbish off the prop. Graffiti was in abundance!!

We did see some seedy characters huddled under bridges “doing the deal” whatever that may have been. Parts of the canal were actually beautiful with gorgeous willows skimming the surface of the canal but as a female there is no way you would consider walking down here on your own. 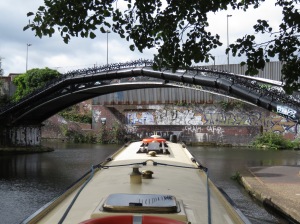 A true indication as to the security of the canals is when Canal and River Trust put locks on the paddles. To get yourself through these locks you need one of these…. 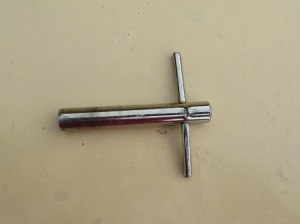 it is called a hand cuff key and every boater carries one in his armoury of boating tools.

Here is a paddle (and they come in all shapes and sizes)…….. 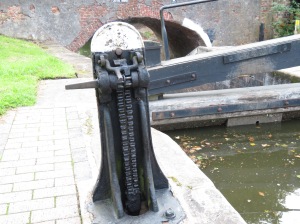 and this is how the hand cuff key works.

Basically what it does is prevents the local ferals from opening up the paddles and emptying the locks of water. If they open up all the paddles along a stretch of canal they will effectively drain the canal of any water and believe us when we say it has been done. The Birmingham area is the only area we have ever had to use the hand cuff keys which when you think of all the miles of the canals is not too bad.

Along the way we encountered a few interesting arts de objects. The mannequins legs sticking out of the blackberry bush we missed with the camera but managed to capture this bit of recycled tyre art?!

We also passed some wild life and this guy caught a fish after we had churned up the water for him. 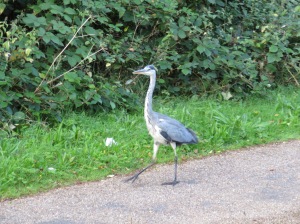 There were some unattractive bits of canal but to be expected when you go under spaghetti junction.

Then you get great scenes like this. As you can see, the first colours of autumn.

We have been having a little discussion and like all good narrowboaters the topic usually turns to the waste system of the boat. We have heard a few names for narrowboats as told by yoghurt pot boaters such as ditch crawler but the one that really seems to stick is sewer tube. We want to allay any concerns of our readers as we may have given you the impression that we actually have a chamber pot that we empty every other day. We have decided to show you today’s high tech version of a chamber pot.

They are called cassettes and are required to be emptied about every other day depending on usage of course. All along the canals are special sanitary (euphemism for large toilet) locations which you empty your cassette into. When you see someone walking down the towpath carrying one of these mobile ablution units, all the boaters refer to it as “the walk of shame”! As to who gets to empty it depends upon who draws the short straw. In our case, it is who has the strength to carry it which is why it usually falls into the guys list of tasks!!! Enough pooh talk.

We did 14 locks, 12 miles and 8 engine hours. We started at 7.00am and pulled in at Catherine de Barnes at 3.00pm where we have called it a day. Our timing was just perfect as look what we encountered.