Travel day today. We had a 250km drive from our place in Wales where we have been for the last six days to Bowness on Windermere in the Lakes District. 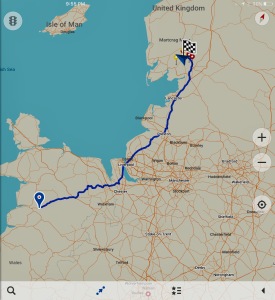 We had a bit of a detour on the way and popped into Blackpool which we had never been to before. The weather held out beautifully for us which was a good thing as nothing worse that being at the seaside in the rain. 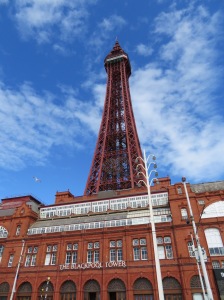 Blackpool is very famous for the tower which was opened to the public in 1894 and has been one of its most popular attractions.

The other well known attraction in Blackpool is the piers. The north pier which we went for a stroll along was opened in 1863 and reading the history of it gave us a better appreciation. 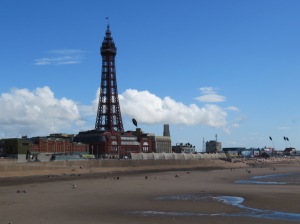 North Pier is the most northerly of the three coastal piers in Blackpool, England. Built in the 1860s, it is also the oldest and longest of the three. Although originally intended only as a promenade, competition forced the pier to widen its attractions to include theatres and bars. Unlike Blackpool’s other piers, which attracted the working classes with open air dancing and amusements, North Pier catered for the “better-class” market, with orchestra concerts and respectable comedians. Until 2011, it was the only Blackpool pier that consistently charged admission – those hey days are truly well over now as the gem has lost a lot of its sparkle.

Now here is a bit of interesting info for those of us who grew up with Sooty and remember spending many an hour transfixed to the TV whilst Sooty taught us how to be “good human beings”. For some of us it worked whilst for others of us – well, we will leave that comment open. Harry Corbett bought his original glove puppet on the North Pier and today you can see it in a case in the theatre at the end of the pier.

We were really blown away with the cost of a single scoop cone ice cream. We have been using this as a gauge to the price of a place. It was £2.50 which is the most expensive by far!! Blackpool is frequented by people from the poorer suburbs of Manchester who have very little disposable income and who keep Blackpool alive, so to rip them off like this is unconscionable. 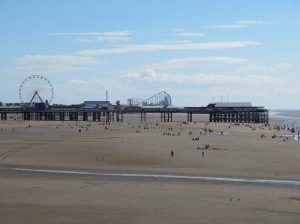 The picture above is of the South Pier taken from the North Pier. The tides here are massive at 7.5m and in the short time we were here the tide came rushing in and it is not a place where you dawdle around on the beach.

It was then onto our next location of Bowness on Windermere which is in the Lakes District. We will be here for the next six days enjoying the gorgeous countryside. Alas though, we have just learnt that there is a major storm moving in from the Atlantic and on Sunday it is going to drop 40mm of rain on us – oh, what joy.

On our arrival we went for a short stroll down town from our Air BnB to find the Hole in T’ Wall pub for our dinner. This is the first time we have tried using an Air BnB and so far it seems fine. Not too dissimilar to an old fashioned B&B. The owners have two little Yorkers which really does not help our home sickness for Mapes and Toque. We spoke to Joannie and Simon last night who were a little concerned about Mapes rubbing her ear a lot and it has turned out that she has a mild ear infection. We are so grateful to the guys who are doing a splendid job for us.

We made the most of the evening setting sun on our walk as we might not be able to take any good photos for the next few days courtesy of this incoming storm. Just reviewing the current forecast it is truly shitty – the six days we are here it is going to rain heavily for the entire time. We have a steam train trip organised for Tuesday and it truly looks bloody miserable!!!