Three days spent catching our breath and enjoying the great companionship of Elfi and Horst. This is not to mean we sat on our backsides doing nothing except for the first day, but then again it was raining.

Our clothes got a much needed work out in Elfi’s washing machine and now we do not feel so much like dirty hobos anymore but just hobos. There is going to be a ceremonial burning of these clothes when we return to Calgary!!!

Our other task was to clean the bikes and put Di’s bike up for sale on eBay. Not sure it will be successful but if not, Elfi has herself a pretty new bike. Maybe next time we return for bike rides Di might be a lot fitter and feel more capable of biking up hills or maybe she just has to accept the fact that it is time to close that chapter of the book.

Horst had this wonderful idea that we go to a rope course up in the Spessart area in Bavaria. Elfi, Di and Fraser participated in the activity which proved extremely tiring and difficult. We watched some younger people and they just bounced around and made us feel even older than we already felt. 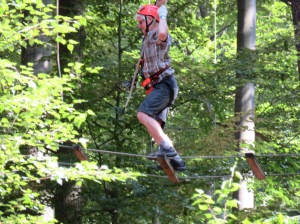 What was interesting is that the person who suggested the rope course did not participate. – at times his name was mud when we were up there struggling. Elfi who is 9 years older than us put us to absolute shame – well certainly Di anyway!!!

After our energetic foray we then found yet another Biergarten to partake of some beverages but prior to eating we went around a small lake and we know Wolfgang and Marlene will be very surprised to know that we saw a Kingfisher. These birds are a brilliant blue colour and very elusive so it is a privilege that you see one. We have seen them before in the UK. 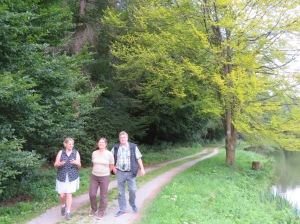 When we were in Austria at Grossglockner we bought Elfi and Horst a yodelling marmot. The reason for this was that when we were there they were only about 50k on the other side of Grossglockner with their daughter, son-in-law and grandson Fabian. We said we would yodel to them. Hence the appearance of Murray the snaps drinking, yodelling Marmot. Hope you enjoy the video.

So tomorrow Phase 9 commences. This is quite a short phase but still deserves being called a phase as it involves another country and new people. We will be catching the ICE train from Frankfurt to Paris and then transferring to a TGV (bloody fast train) down to a Rodez in southern France. Now some of you may think the name Rodez might sound familiar and that is because they finished Stage 14 of the Tour de France there this year.

You ask, why we go there? We have very good friends Belinda and Dom who use to work for Shell in England. We knew Belinda back in our Muswellbrook days when she also worked at one of the coal mines in the area. We have kept in touch with Belinda over the years and have caught up with her quite a number of times in many different places around the world. When she worked for Shell, she travelled the world extensively for about five years and this gave us an opportunity to have lots of fun times together.

Belinda now lives with Dominque in Melbourne with their little red headed cutie Alexander. Dom comes from Rodez and they will be visiting his parents next week and invited us to catch up with them. As you all know, we never need much of an invite to turn up on your doorstep. So, hence our visit to Rodez. We can only stay a few days as then we must go back to Hilversum in the Netherlands and pick up the rest of our luggage and leave Europe as our 90 days will be up. Not a good idea to out stay our welcome if we plan to want to return.

We stay one night with Ali and Ads and the kids in Hilversum and then fly to Manchester to begin Phase 10. We are not sure what internet connection will be like whilst at Dom’s parents place as they actually Iive in a little village. All sounds very romantic!!! Dom tells us they live in a Chateau that even has a turret though the turret is a little on the sad side he says. Doesn’t matter as it still sounds romantic. For us the weather is looking good as it is in the low 20’s as usually it gets uncomfortably hot in this region.

Belinda, Dom and Alexander don’t actually get to his parents place until the day after we arrive and he has told us they do not speak a word of English and our French is a lot worse than our German. This is going to be interesting but humourous.
So more to come once we get there.