Awoke to a wet Sunday as predicted. According to the hourly forecast it would become lighter rain and eventually cease altogether by 2.00pm. We have not had to ride in this kind of weather before and it is not as though we can sit it out as we have 51k’s to do today.

So left our swanky Business Class Hotel around 9.00am and headed down into the gloom of the first lake. We had all our rain weather gear on as well as the odd clothing invention to try to keep the precipitation out.

We made sure that we stood out well to any traffic and were hoping that being a Sunday morning that not too many cars would be about as we had some serious road cycling to start with.

Our first point of interest was this wooden bridge which was originally built as part of the Santiago de Compostela pilgrim route that goes right down into Spain/Portugal.

At times we sought shelter in many places as the rain was relentless and getting heavier. So much for the weather forecast of it getting lighter. 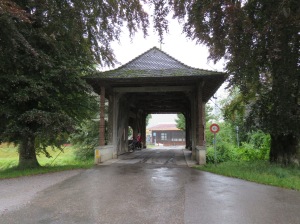 It was about this time that Di said enough was enough and opted to finish the final 31k’s in the comfort of a train to our lodgings in a tiny place called Quarten.

Fras decided he would brave it out and for his perseverance he was awarded some great photo ops.

Part of the bike trail utilised some old rail tracks and tunnels.

These kept him dry for a little while. 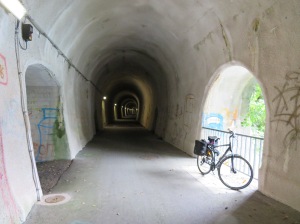 It was nearly a day of flat biking except for this little killer of a spot!! Had to go up rather than down. (Gulp)

If the weather had been fine it would have been a spectacular bike ride as the scenery was to die for and the bike path went right along the lake edge.

Discovered a couple of hardy soles braving the weather.

This particular little town called Quinten across the other side of Lake Wallensee, which is the lake Fraser biked along in the afternoon, is only accessible by ferry and has no motorized transport there. On a finer day we may well have taken the opportunity to pop over there.

Our Accomodation tonight is a rather interesting choice by us and not quite sure how we ended up deciding on it. It is actually a working seminary with lots of nuns. They run the hotel as a going concern and we were greeted by a nun at reception sitting behind her computer and checking in guests. Don’t get that every day. 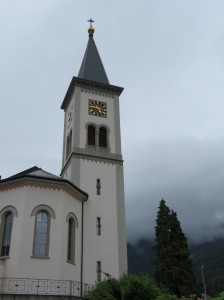 Noticed that there were 2 pay phones in the reception. Upon enquiry the nun said one was a line to the Pope in Rome. The other was to “you know who”. She said that one was easier to use and it is a local call !!!

There must be some religious conference on as there are a lot of people here and the facility is busy. The view from our room is stunning as are the grounds of the place.

There is a tiny chapel which we didn’t go into as it was being used. This whole place seems to have quite a significant history to the area. 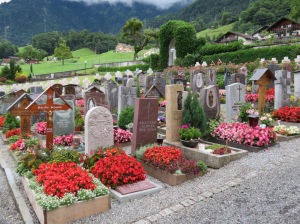 This place is run as a going business and has an 8.9 Tripadvisor rating and it deserves a 10 for cleanliness. Di went and asked for a glass of milk so as she could make herself a cup of tea and it cost her 3.50CHF, which is about $5CAD. It brought back those memories of her working at St Vincent’s Private Clinic in Sydney which was owned and run by the Sisters of Charity and she can assure you, there was no charity from that bunch. Jewish patients were charged more than the Catholic patients.