So we survived the three days at sea between the Azores and Brest, France. The seas were pretty calm and we got to know the boat extremely well during that time. The weather has been getting progressively cooler so alas, no further water slides or rope courses for us.
Altogether we were ten days at sea which was probably too much but at least we can now tick it off our bucket list.
This morning to woke up to find that we had berthed at the port of Brest which is at the western most tip of France. The day started out as quite sunny and with high expectations from the 3,800 guests who had been suffering from cabin fever. 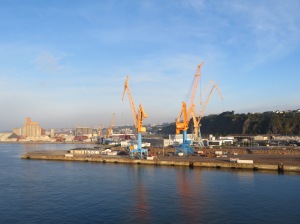 Well things began to deteriorate about half an hour after that. The organization for getting everybody off and on the boat was very poor and we had to queue for two hours to make our way down the gang plank. Not too sure what caused the delay except we were told something about a high tide affecting where the plank could go. By the time we got off the boat the weather had changed to being overcast and rain which darkened the mood of everyone even further.
Get annoyed with these cruise companies that nickel and dime you and feed you only the information that will create even more revenue for them. A classic example was a shuttle bus provided by the cruise line from the boat to the town centre which was four kilometres away at the cost of $15USD per person which is excessive. There was scant information about a free shuttle bus provided by the port authority to the gates of the port and from there you could either walk or get a taxi. With the four of us it would have cost us $60USD on the bus provided by the boat so you could see why we opted for a taxi that was actually able to pick us up right at the steps of the boat.
We have a very similar example where the cruise line are saying the only way to get off the boat in St Petersburg is through an excursion booked through them as you need a visa for Russia. You could apply for your own Russian visa which is very complicated. The truth of the matter is that there are Tour operators in St Petersburg who are registered with the Russian government who can provide you with “tourist tickets” and who provide tours at half the price of what the cruise companies charge and double the time and with a max of 16 people only on them. You need a degree in cruising to work around all this. Having said that we met a couple the other night who were not sure of they had done 80 or 90 cruises……..whoa, they need to get a life. 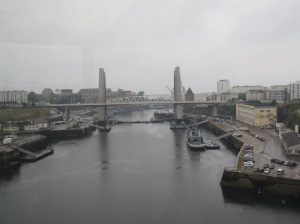 The taxi driver dropped us off at a cable car that went across the river and then we walked over the bridge and around the old fort before making our way into the main pedestrian thoroughfare.

The old fort now appears to be used as a naval training college. 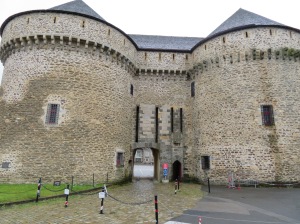 The gardens around the fort were in full bloom with magnificent irises and trees loaded with camellias along with azaleas. 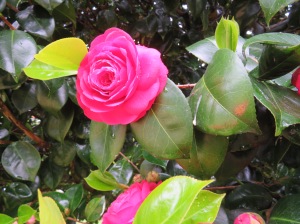 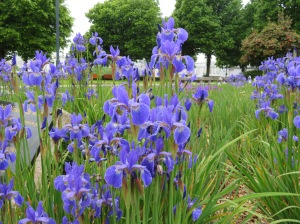 There wasn’t much to see in the town but it was good to get out and stretch our legs. We were also out and about on the snoop to see what if we could catch some free wifi but could only get 15 minutes which wasn’t left no enough to post the blogs that we have stored up.
Made our way back via taxi to reboard the boat. She certainly stands out in the harbour. For those of you who are into stats, this little tug is 165,000 tones and is 18 stories high. So as you can see, just a little on the imposing size. 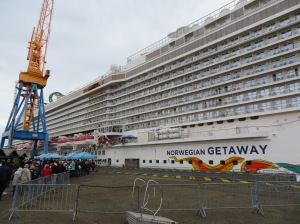 Everything is into excess on it including the pillows on our bed.
Actually, that’s not true. Di just needs a few extra pillows at night for her back. 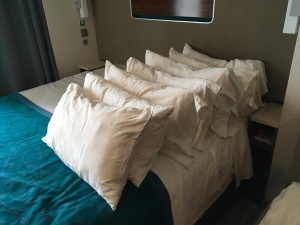 So left the port at 4.00pm to make our way to Southampton. We have hit a bit of an immigration snag which is going to chew into our time in Southampton. What usually happens is a customs official is flown out to the Azores from the UK and he/she spends the three days that we are at sea processing everyone’s passport documentation. Of course that did not happen as we didn’t get onto the Azores, so now we have to all be processed on the ship once we arrive in Southampton. This is going to chew into our time significantly.

We were hoping to catch a train up to Winchester to see the cathedral and then come back to the boat via Portsmouth where we were going to see the Mary Rose.
We had seen the Mary Rose back in 1991 when they had only just started the restoration work and were really hoping to see the completed job. We have been told it is rather magnificent and well worth the trip but we are now too short of time to do it. We have not seen Winchester cathedral before so we have opted to do that instead. We are back here in 2019 to do another four months on the narrowboat so we have the time then to take a day off and see the Mary Rose.