We needed an early start today as wanted to get into Stratford-on-Avon in the early afternoon as Fras was off to Birmingham tonight to a concert. Alas though, the heavy fog this morning was not co-operating and we were unable to get away until 9.30am.

We spent the time waiting having a cuppa and catching up on some daily routine chores within nb Lucy. 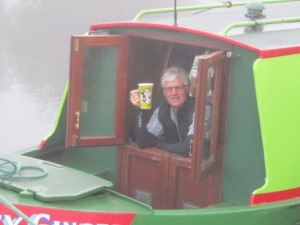 The girls spent the time acquainting themselves with the local dogs.

We had four and a half hours cruising and six double locks ahead today so we teamed up with another crew which makes doing the double locks a bit easier.

Our first task today was to maneuver our way under the rather narrow low bridge in still pretty soupy conditions.

The closer we got to Stratford the grander the homes became and were very breathtaking. We especially liked the gardens with their manicured lawns. 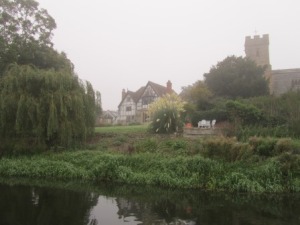 We also noticed the increase in the Tupperware (a.k.a. fizz, plastic, yoghurt container) boats. What do you call a collection of plastic boats – a Tupperware drawer.

Just a few photos of the surroundings through the fog which didn’t burn off until we arrived in Stratford mid-afternoon.

It was extremely warm and humid most of the day which brought out lots of pommes and tourists. Very quickly we became part of a flotilla of row boats, floating restaurants, other boaters and lots of fowl life. 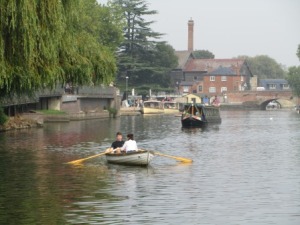 Turning the corner we came suddenly onto the Shakespeare Theatre which is quite the building.

We had one final lock to go through to get into the basin for the evening and we were doing our own performance in front of quite the audience of gongoozlers. Luckily, we didn’t make ourselves look like novice boat renters.

Our berth tonight it right in front of old “Will’s” statue. 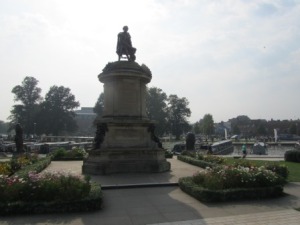 It was quite elaborate with minor statues relating to some of his major writings.

We have decided not to take in a play as when we were last here in 1991 we forked out a fortune to see King Lear (we think it was) and it was the most mind numbing evening so instead we decided to give it a miss. Instead, Fras has arranged to go by train into Birmingham tonight to see a concert called Aggers and Tuffers which consists of an ex-cricketer and a cricket announcer on stage spinning the bullshit for two hours. Actually, they are quite funny guys. Di decided not to go as we would have been away for seven hours and due to the hot weather the boat was too warm and not suitable to leave the dogs in.

So Fras chugged off at 5.00pm whilst Di wandered around Stratford a little more taking in a few of the sights. She wondered with the plethora of flotilla around as to how many collisions occur on this very confined waterway.