Today it was fresh crew on board. Nadine and Peter from Canada came into Manchester this morning and then caught the train down to Birmingham to arrive at midday. This gave us a little opportunity prior to their arrival to tart up nb Lucy; do the bed shuffle and talk sternly to the pooches as Pete is blind so we do not want them wandering around his feet.

We then wandered around the basin area to check out how the canal system worked as there seems to be a spaghetti junction of them here. The Gas Street basin where we are moored got its name as it is where the first street gas light was installed. It is certainly a very busy area. 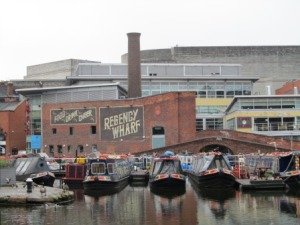 As you can imagine, there is a hell of a lot of canal history in this area. It would be hard to even start to explain some of it as there is 200 years of it. 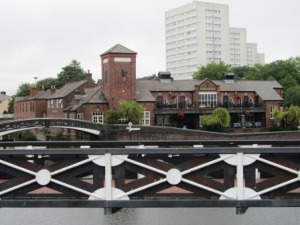 Like Liverpool and Manchester, the center of the city has been rejuvenated with a lot of work still being done. Life is coming back into these cities which can only but be a positive thing. 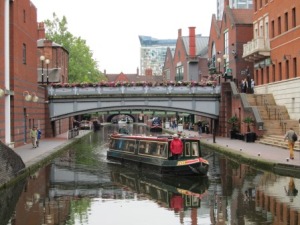 They have done a wonderful job here with the flower boxes. Must admit though, there are always a lot of stairs to have to climb.

Once Nadine and Peter were settled into their little nook on nb Lucy, we gave them a light lunch and dragged them for a bit of sightseeing. Our first port of call was the Symphony Hall which the Brummies’ are very proud of. The acoustics in the hall apparently are the best in the world. 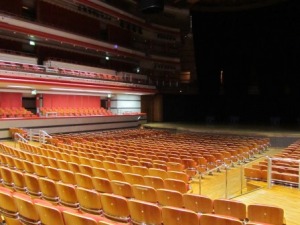 Next port of call was this statue of three dudes telling all how it was going to be. Guess nothing much has changed. They set up plans for the initial layout for the city center. Not sure why they got their rather flashy statue erected in their honour as their dream/plans didn’t come to full fruition. Though, should mention one of them was James Watt who invented the steam engine. Thank you Mr Watt for popping up on our electricity bill every month. 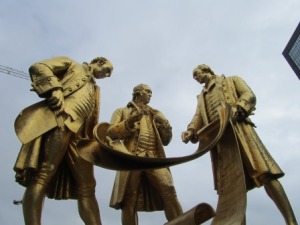 Onto the library. Pretty smicky building. 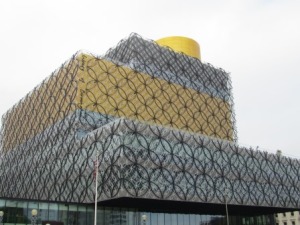 Lastly onto Town Hall. Looking up inside the dome was mind blowing – that is once we picked ourselves up off the floor because we made ourselves dizzy staring up. 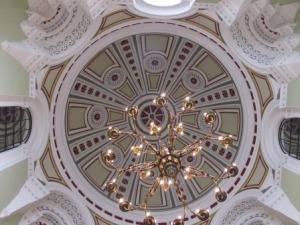 So, after turning the guys into total walking zombies, we allowed them back to the boat for a little shut eye before heading out for a light dinner.

One thought on “Birmingham and New Lock Slaves Loaded”