Hello, my name is Camilla and I am visiting Di and Fraser with my family for 2 nights. I am staying with them in a house boat which fits all of us plus their two cute puppies. We landed yesterday and had an introduction around the area and we got introduced to the locks and the country side. We had a picnic in the late afternoon and we had a bit of company from 5 very playful and friendly dogs! After we went to the place we would be staying overnight and went into the main town for some dinner. I had some delicious Nachos and shared a big ice cream Sunday with Dianne. Then we went to walk back to our cozy house boat for the night. Next morning. Today we are heading to town to give the dogs a little walk and for a coffee- well for the adults, I Had an ice cream. We also went to the local shops to get some supplies for lunch. Lunch has past and now we are off to Audlem which has 20 locks in a row! We all took turns getting out and doing the locks but after a while it’s hard work. When it was my turn for a rest I had some time with one of the cute dogs, Toque. Right now we are cruising to Market Draytern and it has started raining! But that’s okay; it wouldn’t be England without a little rain. This morning and when we arrived yesterday we had great weather- all sun and heat! Tonight Di made a delicious meal for us I enjoyed it very much! Also I forgot to mention that yesterday we went to a nuclear bunker which was cool but also the plastic manikins were kind of creepy but in the end it was interesting because it contained all the original equipment for the cold war- so I will never forget it! I had some chances of driving the boats but I had the help of Fraser since I am not very confident since it is such a long boat. Something I really enjoyed about this trip was viewing the beautiful country side and the nature around us. Whilst riding on the nb Lucy I found and saw a wonderful and very clever honor stall was that when going down the canal we would sometimes run into little ‘shops/stalls’ along the side and basically what would happen is the stall would contain food for example one we went to contained ice cream, clotted cream and a variety of cakes and their would also be a money box so once you’ve decided what you would like you put the money in the box and grab the treat. How cool? I also like the amount of trust in these although some had camera’s watching but that’s understandable. I think they should definitely have more in Holland- maybe for bikers. 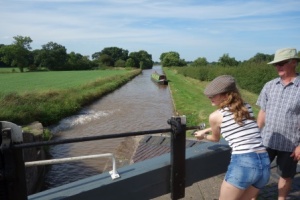 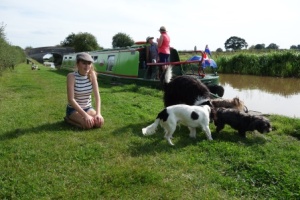 My name is Ollie and today I tried driving the canal boat. It was nuts! First, I started stressing a lot but after a while, I was said to be a natural! Fraser said to me that it’s like pushing the back of a pencil. It took me a while to understand what he meant but I eventually found out what he was talking about. Secondly, the team and I also went to hack green nuclear bunker! We came to the place a bit late and there were 27 rooms! I got a little keychain from the bunker and when we came to the boat, I dropped my keyring in the dirty canal…BUT another friendly guy (this was the owner of the playful dogs, Camilla was talking about) came with his boat and gave us a magnet with rope and believe it or not, we got the keyring! Overall, I thought going on a boat was a blast.

One thought on “Nantwich to Market Drayton”