So, how about this for a spot to do a blog on a spectacular day. We pulled up today in a beautiful spot on the Shropshire Canal (that’s Shropie to those in the know) as the nb Lucy’s mother ship came out to do a service on her. She has done nearly 400 hours motoring so it was time for oil, filters and also an alternator as we have been having a few problems with the electricals. 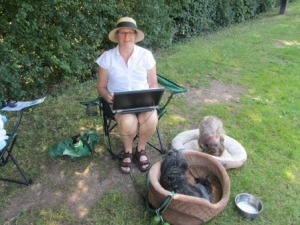 It only involved an hour’s drive for them to find us from their base in Stone so it appears that we have not travelled very far in the last three months.

Today in general has been a day for getting things back in order on nb Lucy so attended to that not-so-nice task of doing a pump out. Ewww!!

We are on our way to Chester had have some fine days of weather coming up so wanted to get all these household chores out of the way so that we can enjoy ourselves. That included tossing Toque back in the shower after bathing her only two days ago as she decided to roll in some serious dog pooh!!

So let’s go back to a few days ago to Northwich where we had moored up for the night with P+P. The following morning we walked up into the town for a full English breakfast – well some of has had the full catastrophe – and then Big P went off to pick up the hire car whilst Little P, Fras and Di wandered off to Waitrose to top up with some groceries. We all rendezvoused back at nb Lucy and then bid our fond farewells to the guys.

We then made our way back to the bottom of the Anderton Lift for our passage back up to the Trent and Mersey. Once again, it was quite an honour to have been able to do the lift.

Fras has not been feeling the best for the last few days with a cold so we pulled up not too far up the canal so that he could have a rest to try and beat the cold.

In the morning we headed on up to the four locks at Middlewich which we had done two days previously with P+P taking only two hours to go up and down. Well, today was another story. We had forgotten that Sunday’s are the changeover for hire boats when end hires are coming back in and the boats are being turned around ready to go out again with new hires all in about four hours. Right in the middle of the locks is the Middlewich Hire Boat company and it was a nightmare.

Apparently before we arrived there had been an “almost” fisty cuffs happen between boaters queueing for the locks. What makes these series of locks worse is that it is also a junction where the Trent and Mersey meet the Shropshire Canal. A good way to describe the mayhem is a “cluster fuck”!!

By the time we got there we were tenth in line for the lock so it was pretty easy for us to kill the time by having some lunch and catching up on some computer stuff.

The photo above is at the junction itself where in the distance is the lock coming down from the Trent and Mersey and the boat on the right is coming out of the Shropie having just come down that lock. The white building to the left top of the photo is a pub with patrons sitting outside being immensely entertained by all the commotion.

Whilst waiting we had a little wander and took a few photos of some of the lock surrounds. It really is amazing the ornate stone work that has been done during the building of the canals.

Finally it was our turn to turn onto the Shropie and head to Barbridge Junction. In all it took us four hours!!

We are now in the Cheshire countryside where the scenery is more than appealing. This is boater’s paradise area. 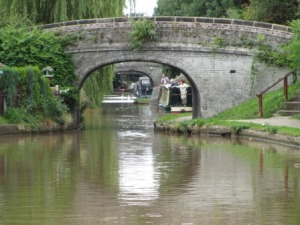 We also got to watch Daisy head off towards the milking shed. 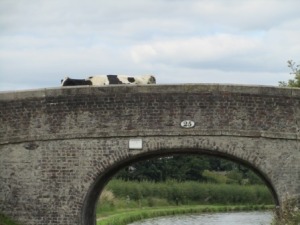 We are both trying to get our 10,000 steps in each day by walking along the towpath only today Fraser was accosted by a big green monster that ripped his hat from his head. 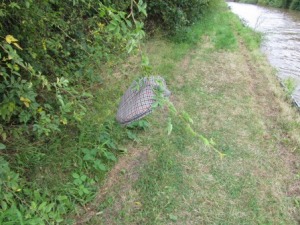 Cruising along we passed by this enthusiasts boat who even polished his engine – now that is being passionate.

He also had many items on the roof of his boat that required polishing – bugger that – we are on holiday.

It is so nice to be back into narrow locks after all the wide ones on the Leeds and Liverpool Canal. They feel very welcoming and cozy – well as cozy as these things can be.

Please note the blue sky whilst in the depths of the lock. 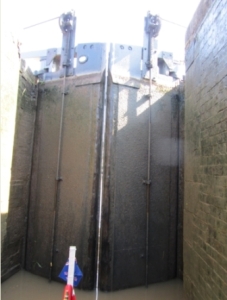 This is a great view of the lock gates behind the boat. This lock was pretty deep at about 11 foot but the narrowness of it does make it appear deeper.

So after the engine service and a few other bits of life saving items attended to on Lucy we offloaded one of the larger items of furniture as we have a family of four joining us in a week and will need a little room. Also, the two seater settee takes us a lot of room and with only us on the boat most of the time we really do not need it as well as the two large lounge chairs.

Tried to post the blog last night but had no service available. Considering how long we have been out now this is one of the few nights with no service which is remarkable.

We continued cruising until quite late yesterday evening as it was cooler and the light is lovely. Also, most boaters have pulled up by 4.00pm so it is very easy to get through the locks.

We moored up fairly close to the Crewe to Chester rail line which wasn’t too bad and beside this lovely old signal box which is still in use. 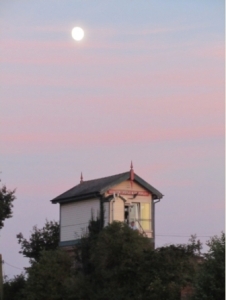 The setting sun and the mist on the service of the water – very serene.

In the morning we cruised for about an hour and then pulled up as we wanted to climb up to the 13th century Beeston Castle which sits dramatically on a cliff. 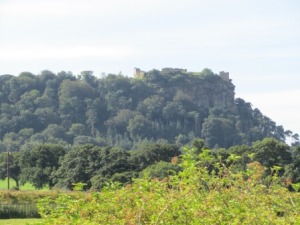 Bit of a walk through a farmers paddocks then a climb to the top. The view was quite spectacular and worth the effort.

Surprisingly the countryside of Cheshire is quite flat. 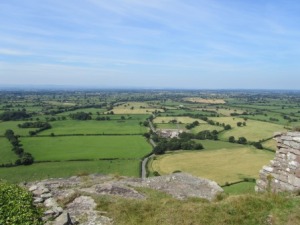 Not much left of the castle up at the summit except the remnants of an old well. There was also an inner and an outer wall. Would have taken quite the effort attack this fortress.

At the top you could look out towards the Peckforton Castle which was only a mile away. This is now a venue for weddings – pretty cool venue.

Below are the local sheep crazing at the summit upon the rabbit poo!!!

The approach at the summit to enter in through the doors of the castle is very steep – guess to make things just that little more difficult to anyone wanting to pay an unwanted visit. There was no moat but just a large steep ditch.

So back to the cut to move on further down the canal to our final destination of Chester for the evening. Lots of lovely old bridges along the way made of stone. To think that they only had horses and drays when making all this.

We pulled into a little town called Christleton that the guide book recommended. Cute but nothing overly outstanding.

One of the things that cell phones have created is a redundancy of the good old red phone boxes. Very much an English icon but at least they are still being put to good use. This particular one is a hot spot for internet, email whereas we have seen others that have been turned into “holes in the wall” and also locations for defibrillators. 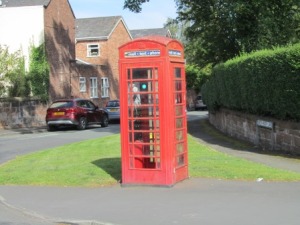 We cruised into Chester around 7.00pm and found it a little difficult to get a mooring right in the centre of the city but found something a little further around the corner. We need to walk back a few locks tomorrow as we have ordered another bag of pooch food from a vet. We have worked out we are a week short of dog food until the end of our trip. Bit of a bugger but guess the option of starving the monsters isn’t really on the cards.