Bit of a noisy night last night but what do you expect when you are moored up in the center of a large city on a Saturday night. Today we split up for a few hours to do our own thing.

Di went back into the center of the shopping area of Manchester as she needed to get a couple of items of clothing. She basically went back over the same ground as she did yesterday with Fras but this time she got to linger longer!!!! M&S were her first port of call along with the House of Fraser. She steered clear of Selfridges as that is one very exclusive store with price tags to match. Price wise things are comparable but the style of ladies clothes does appear to be softer. Maybe it is the fashion of the day but feminine apparel seems to be back on the agenda which is nice to see. Having said that, as she was looking through a rack of clothes in M&S a young girl with numerous piercings, tattoo’s ++ and half her head shaved and dyed bright orange came to look at the same rather conservative rack. She wore jeans that had so many designer rips that you were lucky that 20% of the material was actually there with an off the shoulder top with no bra added to her unique style. I think you call this scene an oxymoron.

On her way back to the boat Di dropped into a café called Annie’s which is owned by the actress Jenny McAlpine who is a long term cast member of Coronation Street. It was a great café that had extremely comfortable chairs and a nice ambience about it. To many of you this is of no interest but to Hilary it does mean something who is another Coro fan. Anyway, that will be it about Coro Street as tomorrow we head off out of Manchester after P+P board the nb Lucy.

Fras meantime went to the Science Museum and he is going to give a spiel on his time there.

Yep. I spent some quality time in the museum of science and industry which is a short walk from the canal basin we are staying at. The museum focus was on Manchester’s role in the progression of science and industry. To say the least Manchester’s contribution is very significant. This city was the terminus of the very first canal (the Bridgewater) and this has been covered in our previous blogs.

Significantly Manchester also plays a huge role in the technology that supersedes the canal – the railway. In 1831 the world’s first city to city railway started between Manchester and Liverpool.

The museum has lots of details on this including a fantastic replica of the train. The engine’s for this first railway looks very much like Stevenson’s rocket. The site of the museum is the Liverpool railway station which is the world’s oldest and first ever railway station. 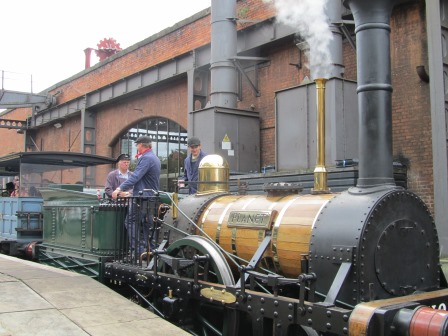 Other things that caught my eye were the displays on the machinery used for cotton manufacture. England off course for nearly a hundred years dominated world cotton trade and manufacturing.

The engine room of the museum contained a lot of steam, hydraulic and petrol engines from all different ages.

Another section was on aircraft and early automobiles. A chap called A.V Roe first built his aircraft in Manchester and went on to establish the well know Avro planes. 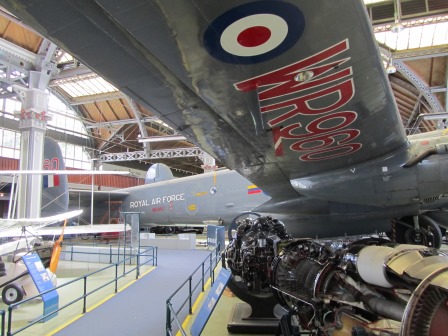