Plans were very straight forward today. We are staying moored up in Leeds and touring around the town. We actually awoke to no rain with a forecast of blue sky with clouds but continuing blustery winds – we are on a real winner here!!!

Headed out about 10.30 with M from across the ropes and the pooches. Leeds has some magnificent old buildings which were built during it’s heyday. This makes for a lovely town centre which is also mostly pedestrian.

Some of the old arcades with the wrought iron work are very intricate and pleasing to the eyes.

Of course like most city centers they are full of the high end shops with lots of people milling around the windows but very few people going inside.

We went into the old Corn Exchange where all the maze from as far north as Scotland was brought to be sold off. The roof was made of wood with a lot of light coming in so that the merchants could see the quality of corn they were bartering for.

Inside the Corn Exchange – Leeds

Spent about four hours in total just wandering around the arcades and dropping into this magical old pub that was built in 1715 which was hidden down a laneway.

Made our way back to Granary Wharf where we caught the water taxi back to nb Lucy for some R+R time.

Right beside where we are moored is the Armoury opened in 1994 with the most amazing display second to the Tower of London. The building has been built in such a way to pay homage to the tower. Amazingly it is free. Fras spent a few hours getting a sword fix whilst Di spent the day catching up with blogs and a few household chores. 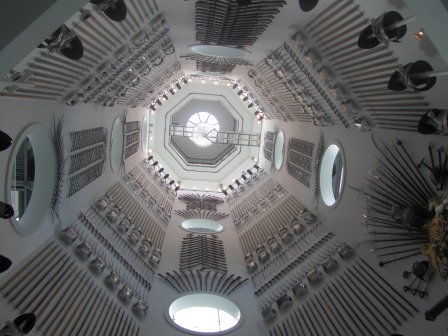